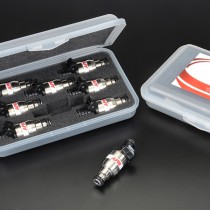 Significantly, the major advantage of FRT injectors is their reaction time due to a new electronic solenoid within the injector body that controls the pintel. The diminutive pintel receives its signal from the ECU and by opening and closing faster the FRT injector delivers a crisper, more precise and better atomized charge of fuel. Precise fuel discharge improves the engine’s throttle response and its economy, but above all, increases its power.

Available in either high or low impedance styles AFIS competition injectors operate with either aftermarket or OEM electronic control units. In addition, they are capable of operating at 12 or 16 volts, and all injectors rated at 48lbs and over are flow-matched. This ensures the racer is never “chasing a bad cylinder” caused by a deficient injector. AFIS avoids the implication of the rich or lean cylinder by rating all their injectors to plus-or-minus 1 percent accuracy.

Lastly, AFIS, which was founded by EFI mastermind John Meaney, industry specialist Tom Jenkins, and Precision Turbo principal Harry Hruska, proudly proclaim that their new FRT injectors are U.S.-made and they maintain the largest selection of application-specific injectors in the industry.

This article was written by AFIS